Sometimes you see something that someone else has made and think, “now THAT’S cool.” This is how the inspiration for my newest array of stained glass projects came about. One of the cool things about arts and crafts tends to be about re-purposing, and this new use of old stirrups is one of my favorites so far. I thought about what patterns I would want to do, using stirrups as a base and frame, and off I went. 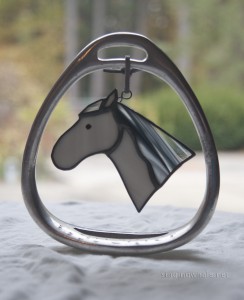 I live in New England, and horses are quite commonplace here. So the obvious choices were to make glass pieces related to horses to use in the stirrups. I found some photos I had of horses and boots, played around in Photoshop to create the line drawings and patterns. Just for fun, I also created a form for a suncatcher to hang in a stirrup, which can wind up being just about any theme. It wasn’t long before a series of pieces came to be. I had already started the process of locating some stirrups which could be used as the frames/bases. With a few then in hand, it came down to just cleaning them up and making the glass.

The glass pieces are attached securely to the stirrups using cord. The stirrups themselves are of variable size depending on what I can find and when, though the glass pieces are consistently sized. Some have the rubber pads, and some don’t. I am happy to take orders, but time for fulfillment depends simply on availability of the used stirrups. Know some place looking to get rid of English iron stirrups in New England? Let me know.

The horse heads and boots will also be made available as stand alone ornaments, new photos of those to come separately. Horses will be $15, and boots $10, sold as singles rather than a joined pair. I am happy to do them in whatever colors you would like. For the stirrups – pieces with just a horse head or just a horse shoe are $35 each plus shipping. Stirrups with a horse head in a horse shoe, small panel, or pair of boots are $45 each plus shipping.

Check out the gallery of the first pieces made!

Recently I started thinking about adding something to my catalog that might be appealing to religious folks. I wanted to do something a little bit different from what I have seen from others, just to stand out a little bit. My first thought was a symbol popularly known as a God’s eye. Like probably millions of kids, I had made at least one out of yarn and popsicle sticks when I was younger. Somehow, it has always stuck with me, despite not being especially religious, myself.

Next, I did what any nerd would do, I Googled it. I discovered that there are not many representations of it in stained glass. And I learned that it has a much deeper history than I had ever realized. It is not a Christian symbol in its origin, but instead hails from the Huichol Indians of Mexico, a tribe originating and residing in the Sierra Madre Occidental Mountains of central northwest Mexico. Their spiritual tradition is nature-based and polytheistic. In a conversation with the head of The Huichol Center for Cultural Survival, I was told that the God’s eye symbol, also called Ojo de Dios, has been incorporated into many belief systems around the world.

Learning as much as I did about the symbol, I felt increasingly drawn to it and felt challenged to make a faithful and respectful representation of it. The four points represent the basic elements of earth, air, fire, and water. The eye is meant to offer protection, especially for children, as well as a connection to the power and mystery of the unknown. The connections that the Huicholes have to the land and sea resonate deeply with me as someone who also is concerned about and interested in our planet.

In typical fashion, one sample is not enough so I created two patterns and six pieces. One pattern is a ‘full size’ sun catcher at about 6 1/4″ in diameter, and with three layers. I also made a smaller, ornament-sized version with just two layers which measures 3 1/2″ across. Each hangs from a hook. As it turned out, I had some terrific glass choices for the first samples of the larger sun catchers. I use a lot of wispy glass in many pieces, meaning a single color of glass with white lightly swirled throughout. Very commonly, the edges of those sheets of glass have the primary color and white together in a straight pattern. I realized that this mimicked the texture of some yarns. Since so many God’s eye pieces are created in yarn, this seemed a great way to start these first pieces. I am pleased with how those turned out, and will be looking out for more such glass as much as I can, and use other colors/textures in the meantime.

The larger God’s eye is $30, and the ornament size is $15. Please let me know what you think, and thanks for reading!